I used to be willing to shell out $30+ for a good foundation brush because I believed so strongly in its role for achieving a smooth and even application. Sephora’s Pro Airbrush #55 has consistently been my go-to, but I’ve been in the market for a replacement brush and didn’t want to shell out so much money again.

Last week, I saw this e.l.f. Blending Brush on a fellow blogger’s page, and was really excited that e.l.f. decided to make it because it’s shaped very similarly to Sephora’s Pro Full Coverage Airbrush #53 that costs $38. This e.l.f. brush on the other hand, you guessed it, is only $6! 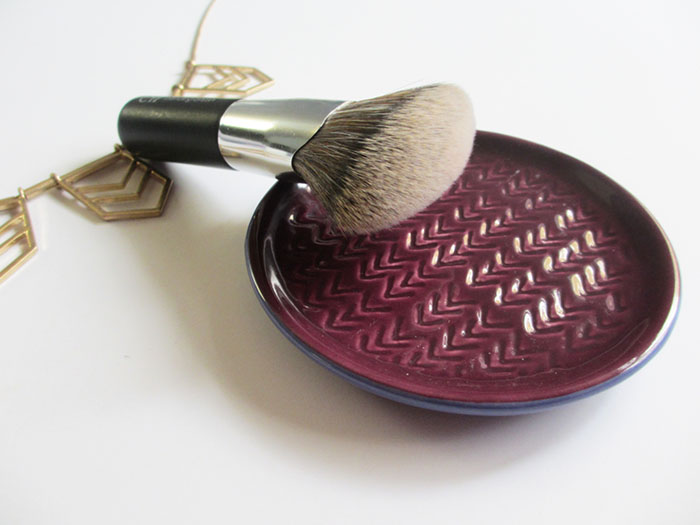 The brush arrived yesterday, and I used it to apply liquid foundation, per the video that Sephora had for its #53 brush, which involved putting 1 pump of foundation on the back of my hand (I’ve used Smashbox for as long as I can remember), dabbing the bristles in, and then sweeping the brush across my cheeks, down to my chin, and then across my forehead and down the middle of my face again. The coverage that I ended up with was very natural-looking, and the greatest part was that I could tell there was barely any trace of foundation left on the brush after application. As you can tell, the bristles on this brush are much shorter than the bristles on the #55 that I currently use, and combined with the density of the fibers, this basically keeps product from getting trapped and unused. I also used this to apply powder shortly after, and it continued to glide across my face smoothly.

I purchased this brush last week when they had a promo for free shipping with any order, but now it appears the brush is excluded from site-wide promos, probably because so many people have raved about this and e.l.f. has realized they can capitalize on this awesome product. Some of you who have followed my blog from the beginning probably remember my comparison of e.l.f.’s contour brush with Marc Jacob’s similar brush, and at that time, it was quite clear the e.l.f. brush was a less luxurious-feeling, but still effective, dupe. However, in this case, e.l.f. has really upped its game, and my $6 contouring brush back then now feels inferior to this blending brush. Not only does this brush have a most substantial weight to it, but the bristles also feel like they’re much higher quality.

I’m so pleased with this brush, and hope you all are able to get your hands on this to experience how well it multi-tasks! I probably won’t be ordering from e.l.f.’s website again anytime soon, but I would love to get a bunch of these for people as holiday gifts. Let me know if you’ve tried this brush yet, and as always, thank you for reading!

5 thoughts on “The $6 Brush You Need In Your Life”

Getting back to this blog after 2 years to share my travel adventures and everything that helped me get there.